I mean, crawl in bed, pull the covers over yourself, and declare the day over at noon kind-of-day.

And I went to bed.

I didn’t even stay up to watch a movie with him, or anything.

And I dreamed. I dreamed of my hometown. I think that the Lord gives us pleasant dreams right at the times we need them most.

I remembered that I had a great childhood.

My hometown was small. The centerpiece was a giant cow located on the lawn of the local utility company. Everybody knew everybody. Or almost… 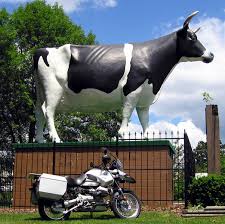 Every summer there was a street festival, every fourth of July there were fireworks, every fall there was the county fair. The homecoming parade and game were always crowded. No one missed out on these things.

My mom’s family lived close by and I would play with my cousins. We would visit Grandma and Grandpa and eat candy from the dish and play all over their yard. She always had a trace and color book for me to work on too.

I walked to school when I was in elementary. Across town. Warm or cold. Sometimes, we even walked the old railroad tracks to school. I would never let my kids do that in this day, but as much as I complained about it then, I love it now.

We lived by a river and went fishing often. We also lived by a huge park with a forest and went hiking a lot. In winter, we would ice skate at the Mill Pond every weekend and sled at Cardboard Hill.

I had a little neighborhood gang. Kinda like the little rascals, except a little older. Maybe more like Saved By the Bell…. We would play kick the can, british bulldog, capture the flag (at night), and even (only once) ding-dong ditch. We were sometimes little rebels: putting pennies on the train tracks to flatten them, swimming in the fountain, rollerblading down the giant hill in town. Apparently we weren’t supposed to do that, but we didn’t know.

I rollerbladed all over the place and rode my bike to the gas station to get candy. Giant pixie sticks, razzles, sixlets….

We had a Rexall pharmacy with a lunch counter. The old bank was turned into a really cool coffee shop, where I developed a love for lattes and spent many an afternoon as a teenager. We used to live next to a hippy named Dino, who made the best pizza and subs. But the ultimate place was Richard’s A&W drive-in that served local brands. The carhops were mostly pretty and popular high school girls. They had the thick glass mugs filled with frothy root beer. It was always a treat to eat there.

And most of my dream took place at the Craft Barn. Now, I know that sounds really cheesy, but it isn’t. The barn is from the 1800’s. And little old lady named Becky owned it, and she turned it into a craft shop and lunch place. The food was great. I loved their homemade butterscotch sundaes and dilly beef sandwiches. I would sit on the porch and enjoy a summer cooler with friends or family. As a matter of fact, some of my friends and family worked there.

Life was really carefree. I miss that.

My childhood seems like a dream. And when I woke up happy, I remembered the old saying, “You can never go back…”

I can never go back to the way things were as a child. Sadly, because of the way times have indeed changed, I cannot recreate that life for my children. I must move forward. But I praise the Lord for the wonderful memories I have of that Mayberry-esque place that I had the privilege of growing up in. Plymouth.

4 thoughts on “I Dreamed of Plymouth….”

I'm Leah. Life can get really crazy in my house. With my personality and seven kids who inherited it, there is never a dull moment. Fortunately, I have two relationships that keep me balanced: The first is with Jesus Christ. The second is with my laid back, handsome husband, Stephen. Add in a cup of coffee and you have my life in a nutshell! I'd love for you to join me in finding some calm in the chaos. Or not...